So -over at Fainting Goat Games we're working a book for ICONS called The Supervillain Handbook. Or possibly: The Field Guide to Supervillains.

The big idea is that it's going to be an exhaustive look at supervillains. This book will detail 40 super villain "archetypes" that often appear in comics, including their abilities, backgrounds, origins, and most importantly the kinds of stories in which they appear.

We've got a rough draft of the manuscript and - we've started a facebook group where we will be posting the archetypes - probably one every few days or so. We've already got most of the art that's finished for the book up there (mostly by the talented Jacob Blackmon).

We'd like to have a big open discussion with ICONS fans and comics fans about the archetypes as we unveil them. The concept is that a big group of comics fans will have insights and thoughts that we might have missed - and through this collective effort - we can make the best book possible.

So - that's the pitch. Please go give it a look.
Posted by mikelaff at 1:14 PM No comments:

I'm working on a new project - here are some more details

The Future of Wargames - Don't Ask Me

I've fielded some questions in the last month from fans of the Wargames line from Vigilance.

Thought I'd just write a blog post to address the issue.

When I left Vigilance there was a dispute over who owns Wargames.

Bottom line: My lawyer has advised me that the legal battle would be prohibitively expensive and she strongly suggested I write Wargames off as a loss and walk away.

I have informed Vigilance Press of my intent to never publish a Wargames product again and to not contest any thing they want to do with it.

It's sad. It was a pet project I was very fond of and worked hard on for 4 years.

But - this is really the only course open.

Unfortunately, I had a fair amount of art I'd already bought for upcoming Wargames releases. In addition, there were several manuscripts completed for that setting. I'll be reusing what I can and just taking a bath on the rest.

Anyway - that's the final word from me on Wargames.
Posted by mikelaff at 6:39 AM No comments:

Professionally, I lost my day job abruptly in February. But after a humiliating 2 month period of unemployment, I found a better job that even paid 15k more. So: 'best of times'. Or, at least, better.

Creatively, 2011 started out as a continuation of the success we'd had in 2010 at Vigilance Press. We were putting out fun books, we were making money (albeit, some but not a ton) - we were continually in the top seller list on RPGNOW, the podcast was growing in popularity. In short: things were fun and going relatively well (or as well as things can go for small press rpg publisher, anyway.)

Then, Vigilance Press was sold and the new owner had a dramatically different vision of how things needed to be.

To make a long story short - there wasn't much interest in me continuing to do the kind of work I'd been doing for Vigilance in 2010 and early 2011. Initially there were some polite comments made about wanting my involvement and contribution since I'd been a big part of Vigilance.

However, in one of the initial organization meetings, I was told in no uncertain terms that they didn't want the kind of stuff I was writing "clogging up the release schedule."

There were some polite attempts made to keep me on as an editor or statblock checker. I got into RPG writing a few years back as a creative outlet. It was increasingly clear that Vigilance would no longer be a venue for that for me. When I was told I'd have to give up control of the podcast I'd been doing for over a year -- well, it was clear that we had to part ways.

Things do change and, while I disagree with his approach, the new owner certainly has a right to do things his way.

You usually want to end these 'year in review' posts on a high note.

But, frankly, I've been at loose ends since then.

I'd been very involved in Vigilance Press on a variety of levels for some time. It's hard to walk away, even if it is time to leave.

For the time being, I'm pursuing freelancing opportunities with various RPG companies - so there be more of that in the future.

On a brighter note, I've converted the VP Podcast to the BAMF Podcast - and it continues to be both fun to do and enjoy a steady audience.

I do, also, have a few more ideas in the pipeline that will see daylight in the near future under my own banner of Fainting Goat Games. Hopefully I'll have my first independent releases ready by February of 2012.
Here are a couple of preview images from the first release 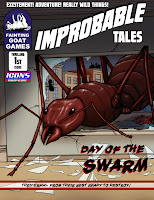 Posted by mikelaff at 7:53 AM No comments:

Sorry I've been neglecting the blog.
Podcast is just so much easier, unfortunately.

Here's the latest - which has been a big hit it seems. It's an actual play/demo of DCA Adventures from Green Ronin (which is, yeah, using the shiny and new Mutants and Masterminds 3rd Ed rules)

Posted by mikelaff at 5:02 AM No comments: